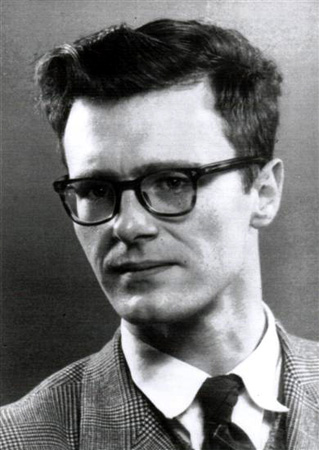 So, upon creating this blog, the first thing I felt obliged to do was to show it off to my roommate and idea-raquetball partner Max Strini (his blog).

His first reaction was "that's sort of militant". Probably in reference to the original name for the blog, Vanguard Against Confusion. The term vanguard is generally used to refer to an aggressive front-line force of some sort. I concurred, but still felt I had made a good choice.

Max then immediately hijacked my computer, launched a new firefox window, and began googling up and mumbling unrecognizable names. Dijkstra, The Humble Programmer, and How do we tell truths that might hurt? suddenly appeared and were read out-loud to me by my excited friend and companion.

How fascinating was Dijkstra? Fascinating enough that, even though I had worked 13 hours straight, eaten almost nothing all day, and have a beautiful wife and 1.5 week old child waiting for me, I felt compelled to click about and read more.

I came across self-stabilization and it occurred to me, that the impetus behind creating this blog is a form of self-stabilization. In one sense, it's my own self-stabilization, in which I will divest and store the processes by which I created order from confusion in my daily life, providing a resource which I could use to reduce the amount of overhead needed to repeat these feats. But secondly, it is self-stabilization as and unconscious process of the online tech-blogging community.

I rely heavily on the blogged accounts of problem-solving that others so diligently post for all the world to see. The first thing I do when I encounter a new and challenging problem is to check and see who has dealt with this problem before, and what did they do? What solutions are already available in the vast spray of information available from public search engines?

Most of the valuable information I find is not the official formal documentation provided by the institutions that created the technologies, detailing every facet of the system with excrutiating thoroughness, but rather the anecdotal, code-snippetted, hyper-linked, semi-stable accounts posted by my unknown peers battling the same dragons. From these bits, I learn how to use the vast and morbid technology describing in the aforementioned chronicles of specificata.

So this blog, is self-stabilization for the blogging culture in which I so heavily rely. If there were no blogs to read, how would I solve many of those problems? Isn't it my duty to give back to that system? Shouldn't I also serve to stabilize this information vortex and let other reap from my trouble-shooting bounty?